skip to main | skip to sidebar

Truth Is What I'm After

Us human creatures are generally social, generally knowledgeable. For being what we are, in large part, we don't know what or who we are. Some of us see ourselves as Christians, others as atheists. Some as animals, some as greater than the animals. Some as rich, poor, or middle-class. Democrat, Republican, Independent. American, European, African, Asian, Russian, Australian. Fit or fat. The identifiers that we use for ourselves are endless. And that is what draws me to the written word.

Fiction is a desperate attempt to tackle the human experience. As writers we fight to capture what it would be like to be 15 and pregnant, or a worker in the old-time Chicago meatpacking district. We want to feel what it's like to kill someone, to see someone being killed, to be a victim. What would it be like to be part of that fairytale romance or in a romance that is destructive more than anything else?

The same goes for journalism. I read news, and hope to write it someday soon, with the goal of connecting people to who they are in relation to their community, state, country, world. Politics matter. The child kidnapped five states over matters.

In a sense, real people every day deal with these issues. This is why I write. I write to learn more about who we humans are as creatures and to get a feeling for why we're here and how things work. Much of fiction and news is grotesque and disturbing, but real life isn't pretty either.

Truth can be found in fiction. News should be the truth. Truth is what I'm after.
Posted by Joshua Scheer at 8:18 AM 2 comments:

A Need for Direction

This week has been quite the adventurous one. I'm throwing myself back into the job market, the blogosphere and the world of writing. It's been fun, but challenging. I won't bore you all with my day-to-day madness, so I'll stick to what this blog is about: fiction.

I had an idea in my head about soldiers returning from Iraq and the challenges they face. Inspiration for this story has come from articles like this one from Esquire, this one from GQ, and from the gripping story "Refresh, Refresh" by Benjamin Percy. 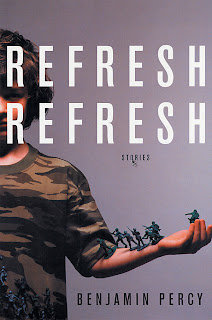 I also had written a random scene that I very much liked. On Monday I attempted to combine the two. I wrote for a couple hours, desperately trying to make it work. It felt awkward and clunky. After throwing in the towel for the day, I realized what my problem was: I didn't have a clear plot.

I write short stories for a couple reasons. One, I don't have the patience or confidence at the moment to tackle a work of novel proportions. Two, I love the medium of short stories. I love how you learn so much so fast about the characters. Short stories are mini-mini-novels. If it's well written it will fulfill the reader just like finishing a book. Really the two mediums shouldn't be compared too much. But just like a novel, you have to have a plot. All I had was a vague idea.

So, Tuesday when I sat down again, I sketched out my characters (at least the ones I knew would have more than a passing role) and plotted out the story. I left the outline loose enough to give me creative freedom, but tight enough to give me direction. Direction is necessary for productivity. The creators of Lost (best story on television right now, that I've watched anyway) said that during Season 3 they began to feel a little 'lost' because the studio wouldn't let them set an end date for the show. But once they set the show at six seasons, they were free to move toward that goal.

Now, I've got to pound out the rest of the rough draft. I won't be around this weekend. Hope to see you all back here on Monday.
Posted by Joshua Scheer at 8:26 AM No comments:

Today marks the beginning of an epic journey for myself. Not unlike Odysseus, I am on my way home from battle. The road will be full of trials and tribulations; the Internet will be a distraction like the Sirens, luring me away from my goal with its sweet song of procrastination. I pray my leap of faith will be worth it in the end.

I quit my job to pursue my dreams of being a journalist and a writer. Today is my first day of unemployment. But I am not wasting my time. I will be applying for jobs across the country in search of that one paper, magazine, website or organization that will realize my passion for news and the written word. I have begun research for a freelance piece on ghost hunting, its rise in popular culture and its presence here in town. I will posting here more often. I will be resuming my fiction writing and seeing where that leads me.

Any rejections I receive (and there will be many, I'm sure) will only mean that I haven't found my place just yet. I won't stop until I'm employed and published. And even then, I won't really be stopping. Writing is now and will be my life. This is what I want for my life.

Of course, none of this would be possible if it weren't for the support of my family. My wife is being overwhelming gracious, understanding and encouraging. For that, I am forever grateful.

This is no longer an experiment. This is for real.
Posted by Joshua Scheer at 10:57 AM 3 comments:

My Articles at Suite101.com

Welcome to my experiment. Here I post bits and pieces of fiction that I'm working on. I will discuss the writing process in it's many facets, including my quest to find a job in journalism and getting my short stories published.

Joshua Scheer
Journalist and fiction writer. I'm doing my best to make a positive impression on the world.